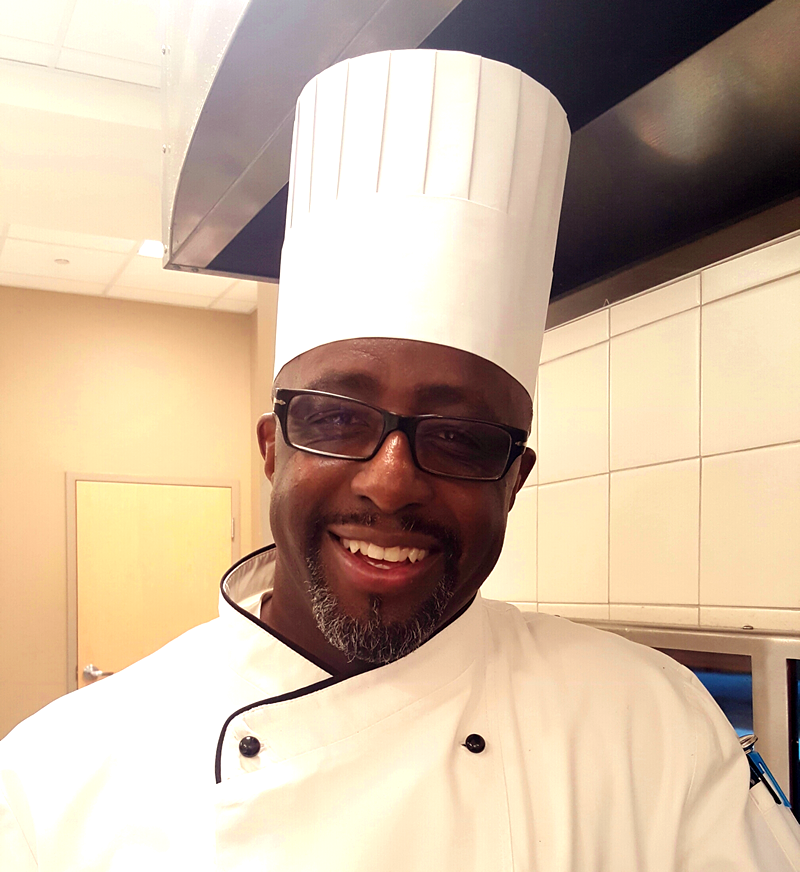 A native of New Orleans, Louisiana, Warren found his calling early on by mimicking many family members (mother, uncles, aunts) in the kitchen.  After graduating from high school in 1982, Warren served 3 years active duty as a cook in the US Army.  At the conclusion of his duty, he returned back home to the Crescent City to refine his skills working for Morrison’s, Martin’s Wine Cellar and as a member of the Army National Guard. Warren found his calling and enrolled in the renowned Johnson & Wales University Culinary program in Charleston, South Carolina and embraced his new career with passion. Upon graduating with an Associate’s Degree in Culinary Arts he accepted a Teaching Assistant position at the school’s main campus in Providence, Rhode Island to further his education.  He received a crash course in New England style cuisine in the predominately Italian/Portuguese city of Providence while working in several school property and local restaurants such as the now well know Capital Grill which he was part of the opening team that opened the very first operation in Providence.

In 1991 after earning his Bachelor’s degree in Food Service Management, Warren accepted a position as manager with US Air Force Reserve at Dobbins AFB, GA. He also decided to leave the Army National Guard and take his talents to the Air Force Reserve.  While living in Atlanta, Georgia he worked in restaurants and hotels, most notably The 73 storied Westin Peachtree Plaza, Sundial Restaurant Bar and View as a restaurant manager.  Warren really honed his skills while at this International convention center hotel located in the heart of downtown Atlanta during the 1996 Summer Olympics.

In 1998, Chef Warren took his skills to Jacksonville, Florida where he became the Executive Chef at the Bank of America Campus Headquarters for Marriott Management Services. During his tenure, he managed staff for the operation and created menus for the café, catering, and daycare for a population of over 5,000 employees.  He also catered for bank executives and an annual VIP banquet for the NFL Jacksonville Jaguars.

Shortly after Marriott Management Services became Sodexo, Chef Warren was named Area Executive Chef and relocated to Phoenix, Arizona while covering a territory of Arizona, New Mexico, Oklahoma, Idaho, and Utah. In his new role, he really found his passion for food and creativity as he was able to use his talents in training, developing programs, marketing, and leading projects such as opening new operations.  The highlight was the 2003 Tostitos Fiesta Bowl National Championship where he successfully led a team of 8 chefs to prepare food for 6,000 VIP’S including government officials and star athletes for an outdoor tailgate party.

When Sodexo was awarded the food service contract with the US Marine Corps, Chef Warren was called upon again to lead the culinary team for all 7 US Marine Corp Bases on the west coast. Chef Warren was successful in creating and implementing multiple new food concepts throughout the mess halls.  The highlight was the annual Marine Corps Birthday Meal which was always a huge hit.

Chef Warren is a seasoned professional with over 30 years of experience in food services. He has significant experience in working across all organizational groups and notable companies such as Marriott, Sheraton, Westin, Tyson Foods, Banner Health, AJ’s Fine Foods, Sodexo, and Aramark.  Chef Warren will delight you with his exquisite palate, creativity to everything he touches.